Back in August, I ordered an Ergodox from MassDrop - Cherry MX Blues, an aluminium top plate, and hardware programmable keyboarding was in my future.

It took a long time for it to get here. Plagued by problems in their supplychain, MassDrop finally got all the pieces together around December, and shipped them off to be assembled for those of us who didn’t want to try their hand at sauldering. It finally showed up on my doorstep last week–though I was so excited that I met the UPS guy in my driveway.

I’m typing on it now. But I didn’t at first. The keys were in such radically different positioning that I couldn’t properly strike the keys. For about 48 hours I could barely type at all. I wondered if I’d made the right choice.

I took a bit of time and kept working. Things were getting slightly easier, but I still was below 70% of my former speed. I decided to try to “get work done” on my second day and just go back to my laptop keyboard. Of course, my fingers had already begun to adjust to the new keyboard layout, and so I couldn’t type on that either. It was a serious wakeup call that I’d basically set out to reprogram my own wetware and become dependent on this thing. Here’s hoping that it’s the last keyboard I buy :)

But after a few days I got very proficient. I’m even faster at using this keyboard as an alternative to a mouse because I almost never have to pick my hands up off the home rows. The fact that it has layers and thumb keys made a huge difference.

So I finally settled on a layout. 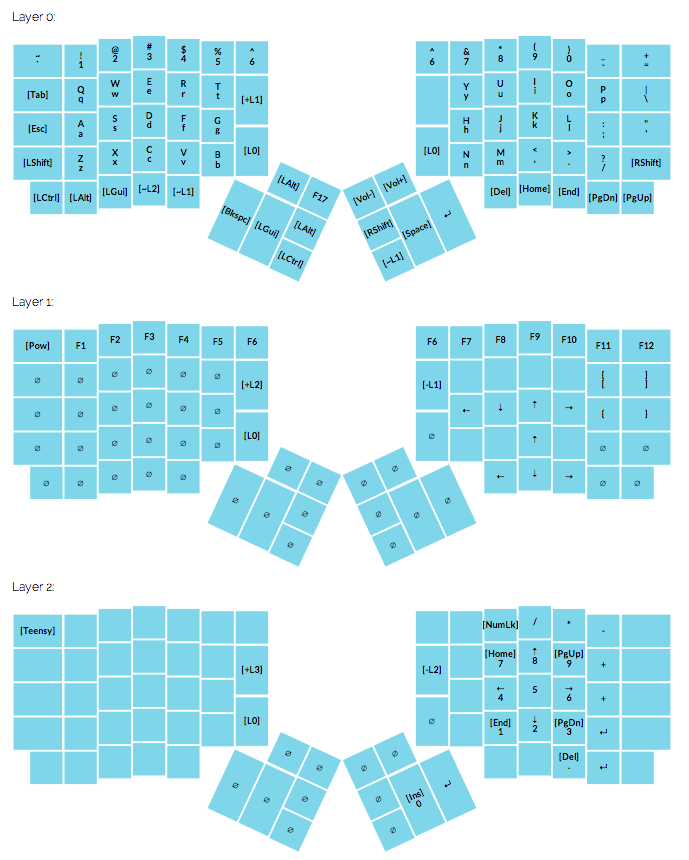 There are several things about this layout that I absolutely love:

All in all, so far I’m loving it. I’m back up to about 90% of my previous speed, but my hands are much more comfortable and I do not have any wrist strain or numbness.

Next step is to tent these slightly and to try to figure out the best positioning for my trackpad. Great investment and totally worth it. Try one if you ever get the chance… but know that it will take quite a while to get used to!